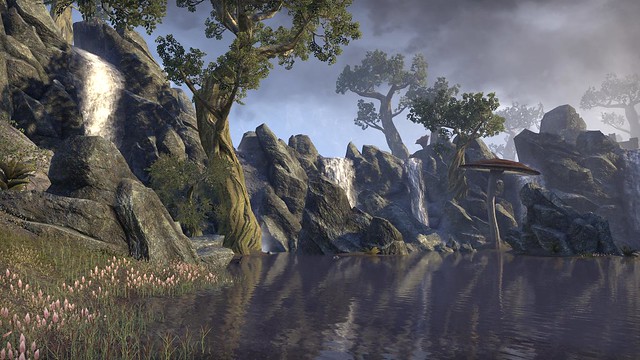 As a long term resident of SL (Second Life) and in-world builder, it is unavoidable to note comparisons with ESO (Elder Scrolls Online) and think about what is absent or similar. Some time ago on here I wrote a few posts about how a SL type environment could benefit from a more MMO type of engine, and ESO taps into this. The obvious difference is ESO is essentially a game, pre-built, quest driven and involving a lot of running around killing things, but there is a lot more to it than that with crossovers between ESO and SL.

There’s no user created content as yet per se, however you can create your own add-ons/mods and customise certain items, while homes are talked about as a possible future inclusion. Other MMOs in the past have included such things, so it obviously not beyond the realms of possibility.

Cooperation and collaboration is a big part of SL (SL is like a social MMO) and ESO has it’s own version of this. It is used and needed sometimes to accomplish certain quests whether its done by anyone you see passing by who helps – or people with whom you are already friends in ESO that you can call them up to come help. 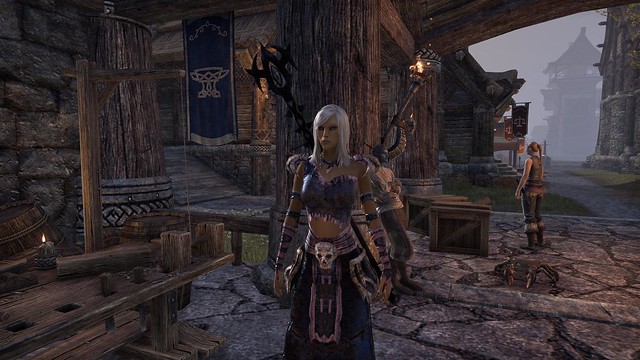 Thanks to the ‘megaservers’ there isn’t the same problem of past MMOs where you are not able to reach friends as they are on different servers. There are 2 main megaservers USA and Europe but you can use either wherever you may live. Communications can be done with it’s own internal email system, chat box that can do the equivilent of local chat, server wide chat or IM and guilds (user groups) tend to state what they prefer for voice if thats wanted such as skype or Ventrillo for example http://www.ventrilo.com/

One great thing of ESO is the open world feel, just set off in a direction and see what you find, something similar to what I’ve done in SL in the past before its shrinkage.
As exploring is the biggest attraction for me, snapping all the views and different landscapes as I travel about appreciating the work (even though its not user created) is a big part of the game for me. Yet, unlike SL, it usually ends up with something trying to kill you, but unlike SL griefers you get to do something more direct about it!

There’s a motivation to improve your avatar – not just through doing quests, but by gaining skills and money from anything from fishing and cooking to crafting skills such as smithing or alchemy and also part of the exploring is finding things you can use or just sell. With the gained skills you can customise your gear in various ways and dye stations that allow you to customise your outfits. Like SL you can create your custom avi, 9 different base types of either sex then you can tweak their appearance in a similar way SL does, nose size, eye colour, face shape etc. You can gain different clothing throughout the game from quest rewards, finding in world, making your own or just buying from traders. 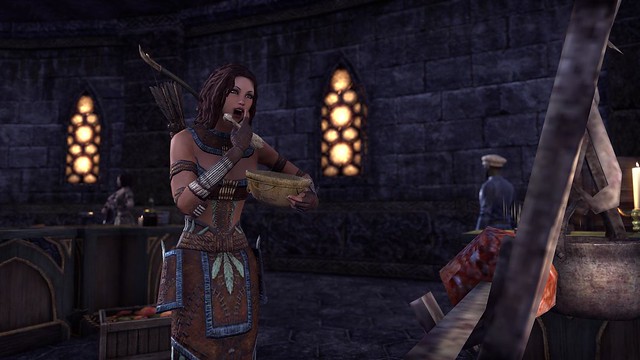 One inevitable unwelcome similarity is frame-rate drop when many users are in the same location. That said, ESO does not suffer from it to the same extent as there has been significant work on trying to reduce this. Unlike SL where it really shows its age, in this respect, ESO has ‘Phasing’ when the load gets too much. This generates another instance of the area where sometimes you and your friend could be next to each other and yet not able to see them, however teleporting to the player solves this and puts you in the same instance/phase.

The graphics of ESO are amazing (especially when you consider this is a MMO) yet compares well to games like Skyrim that need a higher specification PC for best viewing. Yet ESO seems to work well on a good range of machines, Apple users have had performance/stability issues with SL for a long time but even Apple PC works relatively well, thanks to modern design and a good range of graphics settings available to get the best frame-rate for your hardware.

Hopefully Linden Labs’ “New Virtual World” will be learning from the latest MMOs while implementing the better aspects of SL to provide a next generation of social MMO that will fit in better to a mainstream audience.